NFL has partnered the last few years with Zebra to provide on-field player tracking through RFID technology.  This tracking has created a whole new set of player and team statistics, that have been termed as NextGenStats. NextGenStats include information such as the time between the snap and the release of a pass from the QB, the time between the snap and a sack, the average speed of a runner, the location and trajectories of each players on every snap etc.  The detailed data are available through an API from SportsRadar, which however is not publicly open (i.e., it is not free).  Here, I am going to use some aggregated statistics provided by NFL.com in order to showcase the type of questions that can now be answered with this new data.  In particular, I will use the average time to throw metric for each QB for the first 11 weeks of the season.  I will examine their relation with the completion percentage as well as the average air distance of the pass.

Clearly faster releases from the QB minimize the probability of a sack from the defensive line.  What is the upside though? Or is there any? We begin by examining the correlation between the average time to release and the completion percentage for the quarterbacks. 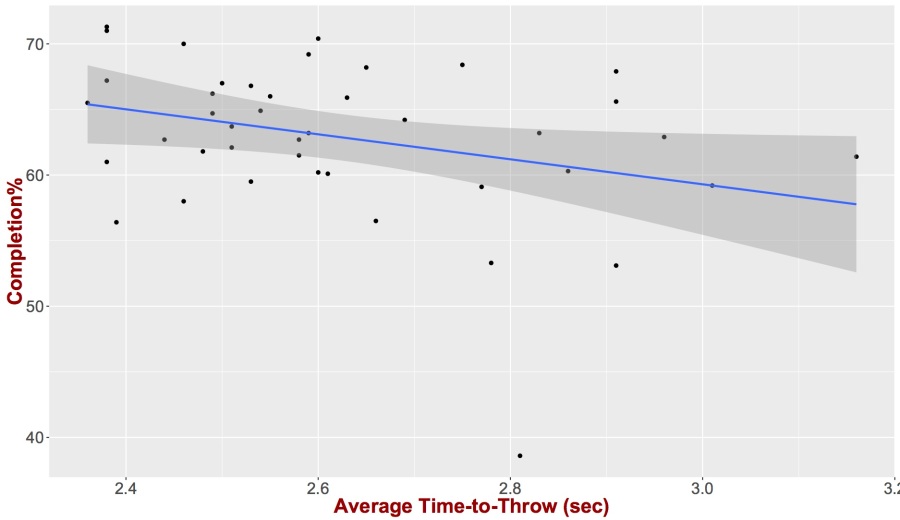 As we can see from the figure there is a declining trend, i.e., the faster the QB pulls the trigger the higher  the probability of completing the pass (!?!).  So not only we get to avoid a sack with a quick release but the chances of completing the pass are also higher! In fact, based on a simple linear model, every additional second of staying in the pocket reduces the completion probability by 9.5% (p-value < 0.05).  Then it seems that fast QBs are the desirable ones, or are they? Completion rate is one measure of success for a QB, but it is not the only – and certainly not the best one. Even if the QB laterals to a wide-receiver for a loss this is a completed pass!  So I examined the relationship between the average time to throw and the average air distance that the ball traveled (this is a new NextGenStat that captures the actual distance that the ball traveled from the QB to the receiver as compared to the traditional air yards gained, which are measured vertically from the line of scrimmage). 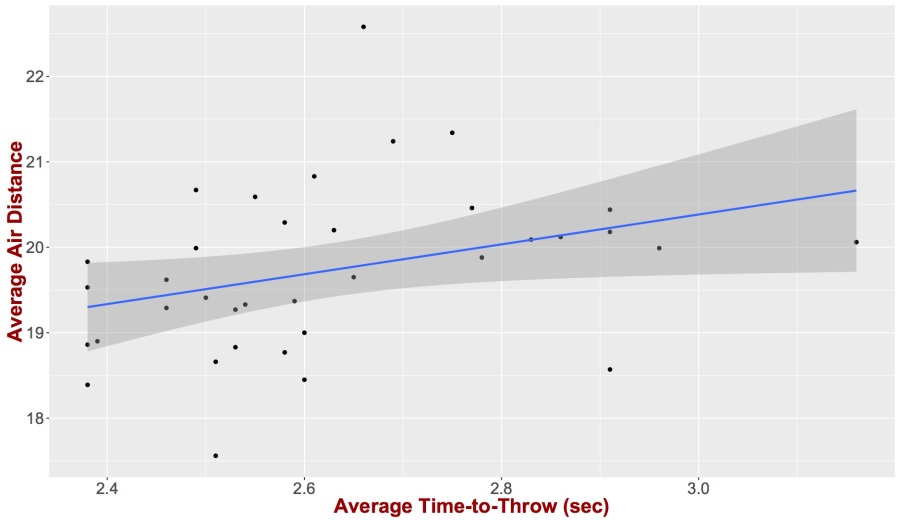 As we can see the longer the QB stays in the pocket the larger the average air distance that the ball travels – and hence, the larger the overall gain. In fact, each additional second adds on average approximately 2 yards on the air (p-value < 0.05).  Hence, QBs that can buy time in the pocket give the opportunity to their receivers to get open and find them down the field for a larger gain.  Of course, it is also more probably that the pass will not be completed (due to the larger difficulty level) or the QB will decide to kill the play if no one is open in order to avoid the sack and loss of yardage.  On the other hand, the fast release will lead to shorter air distance, which also has a lower difficulty level for being completed.  The shorter distance of a fast release might also be expected since the receiver will not have been able to have traveled much out from the line of scrimmage.

Hence, next time that you want your team to draft – or acquire – a QB pick your poisson; you want a fast-release, high completion percentage QB or a slower QB that can potentially make “splash” plays by buying time in the pocket? The data show that there is not really a correlation between this style of play and the winning percentage of the QB’s team (correlation between average time to throw and the win percentage is -0.03 with a p-value of 0.82).  So I guess it is more a matter of personel first of all, and personal preference secondly.

Obviously this post did not aim at answering the question of which type of QB is better (in fact I am not sure whether the aggregated data provided at NFL.com are able to give us the answer) but rather to show that NextGenStats can provide us with much richer information as compared to traditional statistics and can enable new type of analysis. Unfortunately though until access to the detailed NextGenStats is made at a reasonable cost (ideally free), we – the simple computational sports analysts 🙂 – will need to just imagine what is possible!